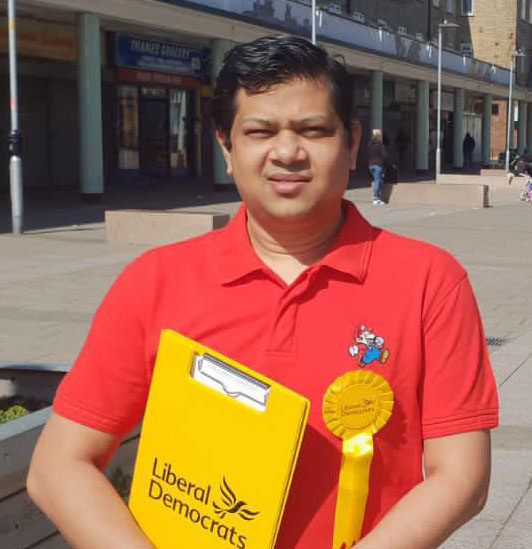 Desh desk, 17 April 2021: The by-election is set to take place on 6 May 2021 in the Thames ward of the London Borough of Barking and Dagenham. On this election Liberal Democrat candidate Afzal Sayed Munna defines as an extended opportunity for residents to abolish what is not working, and to make a fresh start. Afzal believes a local election like Thames ward election is an opportunity to build a stronger community. It is a time to listen more, and to do more to make our ward more vibrant, prosperous and hopeful. To bring about this positive change, we need someone to talk the talk and walk the walk. Afzal is this person, and if elected, he will passionately fight on behalf of residents to make Thames better.

Afzal is an educator, researcher, entrepreneur and community worker who is ready to listen and determined to stand by his residents. He has a clear vision to improve Thames ward, committing to concrete action such as “fighting for my community by bringing a voice of opposition to this one-party Council which presently ignores residents, ensuring that Council and its employees remain at residents’ service, campaigning for recycling and timely rubbish collection, and fighting for glass recycling.” To achieve these goals, Afzal is committed to working closely with residents and guaranteeing their active involvement. He believes, ‘’together we can achieve a stronger, fairer and more open society.’’ If elected, he has vowed to ensure “a strong voice for involving Thames residents in active consultations and to continue my campaign to make the borough greener and safer.’’ If successful, Afzal will be the first Liberal Democrat Councillor ever elected to the London Borough of Barking and Dagenham and he hopes residents will support his campaign to restore democratic checks and balances by adding a voice of opposition to the one-party Council.

According to the information published on the website of Barking and Dagenham Council, 6 candidates including Afzal Munna are contesting in the by-election. The other candidates are Nalule Fatuma Labour Party, Andrew Boff Conservative Party, Mason Pete Trade Unionist and Socialist Coalitions, Baiye Gaman Lucy Ewube Chirstian Peoples Alliance and Zamee Sabbir Independent.

Covid-19: Your questions about pregnancy, fertility and women’s health answered by medical experts

Jahangir Alam Rana, a legendary artist in modern song with the blend of folklore

“If you act fast, then there is more chance of a good recovery”